SECTION AU101 (New) Scope. This appendix provides prescriptive and performance-based requirements for the use of natural cob as a building material.Buildings using cob walls shall comply with this code except as otherwise stated in this appendix.

AU101.1 Scope. This appendix provides prescriptive and performance-based requirements for the use of natural cob as a building material.
Buildings using cob walls shall comply with this code except as otherwise stated in this appendix.

AU101.2 Intent. In addition to the intent described in Section R101.3, the purpose of this appendix is to establish minimum requirements for cob
structures that provide flexibility in the application of certain provisions of the code, to permit the use of site-sourced and local materials, and
innovative combinations of proven historical and modern techniques that are safe, reduce life-cycle impacts, and increase affordability.

AU101.3 Tests and empirical evidence. Tests for an alternative material, design or method of construction shall be in accordance with Section
R104.11.1, and the building official shall have the authority to consider evidence of a history of successful use in lieu of testing. 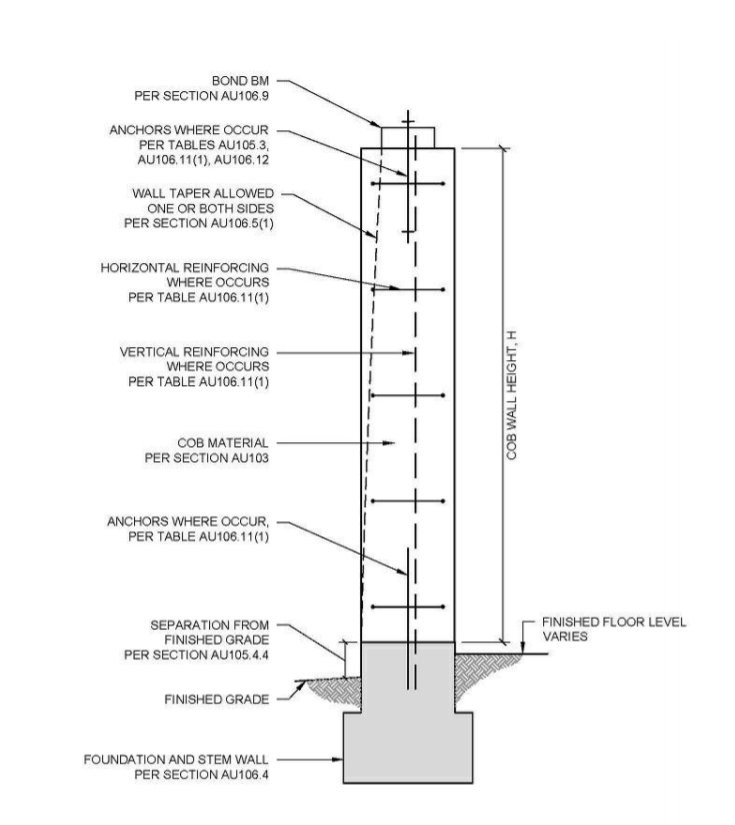 AU102.1 Definitions. The following words and terms shall, for the purposes of this appendix, have the meanings shown herein. Refer to Chapter 2
of the International Residential Code for general definitions.

BRACED WALL PANEL. A cob wall designed and constructed to resist in-plane shear loads through the interaction of the cob material, its
reinforcing and its connections to its bond beam and foundation. The panel’s length meets the requirements for the particular wall type and
contributes toward the total amount of bracing required along its braced wall line in accordance with Sections AU106.11 and R602.10.1.
BUTTRESS. A mass set at an angle to, or bonded to a wall that it strengthens or supports.
CLAY. Inorganic soil with particle sizes less than 0.00008 inch (0.002 mm) having the characteristics of high to very high dry strength and medium
to high plasticity, used as the binder of other component materials in a mix of cob or of clay plaster.
CLAY SUBSOIL. Subsoil sourced directly from the earth, containing clay, sand, and silt, and not more than trace amounts of organic matter.
COB. A composite building material consisting of refined clay or clay subsoil wet-mixed with loose straw and sometimes sand. Also known as
monolithic adobe.
COB CONSTRUCTION. A wall system of layers or lifts of moist cob placed to create monolithic walls, typically without formwork.
DRY JOINT. The boundary between a layer of moist cob and a previously laid and significantly drier, non-malleable layer of cob that requires wetting
to achieve bonding between the layers.
FINISH. Completed combination of materials on the face of a cob wall.
LIFT. A layer of installed cob.
LOAD-BEARING WALL. A cob wall that supports more than 100 pounds per linear foot (1459 N/m) of vertical load in addition to its own weight.
MONOLITHIC ADOBE. Synonymous with cob.
NATURAL COB. Cob not containing admixtures such as Portland cement, lime, asphalt emulsion, or oil. Synonymous with unstabilized cob.
NONSTRUCTURAL WALL. Walls other than load-bearing walls or shear walls.
PLASTER. Clay, soil-cement, gypsum, lime, clay-lime, cement-lime, or cement plaster as described in Section AU104.
SHEAR WALL. A cob wall designed and constructed to resist in-plane lateral seismic and wind forces in accordance with Section AU106.11.
Synonymous with braced wall panel.
STABILIZED. Cob or other earthen material containing admixtures such as Portland cement, lime, asphalt emulsion, or oil, that are intended to help
limit water absorption, stabilize volume, increase strength, and increase durability.
STRUCTURAL WALL. A wall that meets the definition for a load-bearing wall or shear wall.
STRAW. The dry stems of cereal grains after the seed heads have been removed.
UNSTABILIZED. A Cob or other earthen material that does not contain admixtures such as Portland cement, lime, asphalt emulsion, or oil.

Clay subsoil for a cob mix shall be acceptable if the mix it produces meets the requirements of Section AU103.4.

Sand or other aggregates such as, but not limited to, gravel, pumice and lava rock, when added to cob mixes, shall yield a mix that meets the requirements of Section AU103.4.

Each proposed cob mix of different mix proportions shall be placed moist to completely fill a 24-inch by 3 1/2-inch by 3 1/2-inch (610 mm by 89 mm by 89 mm) wooden form on a plastic or paper slip sheet and dried to ambient moisture conditions, or oven dried. The total shrinkage of the length shall not exceed 1 inch (25 mm), as measured from the dried edges of the material to the insides of the form. Cracks in the sample > 1/16 inch (1.5 mm) shall first be closed manually. The shrinkage test shall be shown to the building official for approval before placement of the cob mix onto walls.

The clay subsoil, sand and straw for cob shall be thoroughly mixed by manual or mechanical means with water sufficient to produce a mix of a plastic consistency capable of bonding of successively placed layers or lifts.

Cob shall be installed on the wall in lifts of a height that supports itself with minimal slumping.

Each layer of cob shall be prevented from drying until the next layer is installed, to ensure bonding of successive layers. The top of each layer shall be kept moist and malleable with one or more of the following methods:

When dry joints are unavoidable, the previous layer shall be wetted prior to application of the next layer.

Roof and ceiling loads shall not be added until walls are sufficiently dry to support them without compressing.

NONSTRUCTURAL WALL. Walls other than load-bearing walls or shear walls.

STRUCTURAL WALL. A wall that meets the definition for a load-bearing wall or shear wall.

STRAW. The dry stems of cereal grains after the seed heads have been removed.

UNSTABILIZED. A Cob or other earthen material that does not contain admixtures such as Portland cement, lime, asphalt emulsion, or oil.